As I mentioned in my review of the SAS Lounge in CPH I am predominantly a OneWorld flyer and am used to the principle that applies to Qatar’s Al Mourjan and BA’s Concorde Room Lounges, paid ticket holders in premium cabins get a better lounge than frequent flyers sitting in the back of the bus.

However, this concept does not apply to Lufthansa and SWISS. They have regular Business Class lounges, accessible to those holding business class tickets or mid-tier Miles and More Frequent Traveller status. Then above and beyond these are the Senator lounges.

Senator lounges are accessible to anybody with Star Alliance Gold status, regardless of cabin flown.

So, Star Alliance Gold card holders in economy get a better lounge than infrequent flyers who have paid for intercontinental Business Class tickets. I don’t really get the business logic there (and neither do OneWorld evidently) but thankfully I was able to gain access as a result of my Avianca Amigo Gold Card.

Avianca Amigo Gold comes with Star Alliance Gold benefits and was granted to me as part of a status match promotion. I matched my American Airlines status to Avianca Amigo months before planning this trip. I did it on a purely speculative basis thinking that there would be no harm in getting status with another alliance – just in case.

The Lounge is located in Zurich airport’s E gates, a spiny island surrounded by active runways in all directions. There are three ways to get here:

On this occasion I had to settle for option 3. Neither my arriving flight from CPH nor my departing flight to LAX were being operated by an E gate, so in order to try this newly refurbished lounge I would need to transfer to the E gates and back in the space of an hour!

I arrived at the Welcome Desk on the right hand side and was warmly welcomed to the senator lounge on the right. 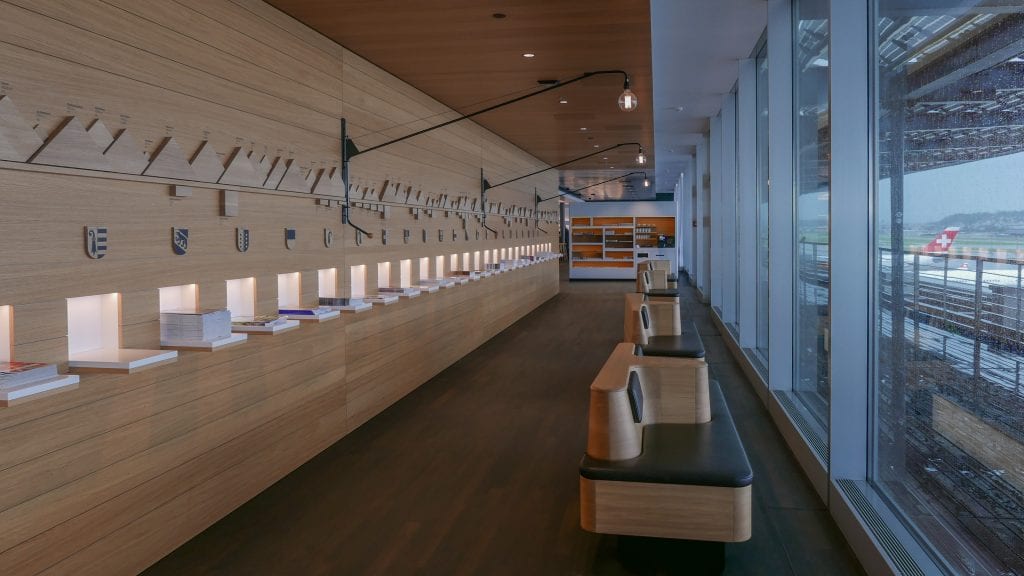 I resisited the temptation to head straight to the whiskey bar by the entrance and instead made my way down the Boulevard and into the main area of the lounge. The design here is very sleek: glass, metal, a ton of wood, lots of natural light and some wonderful views of the planes! 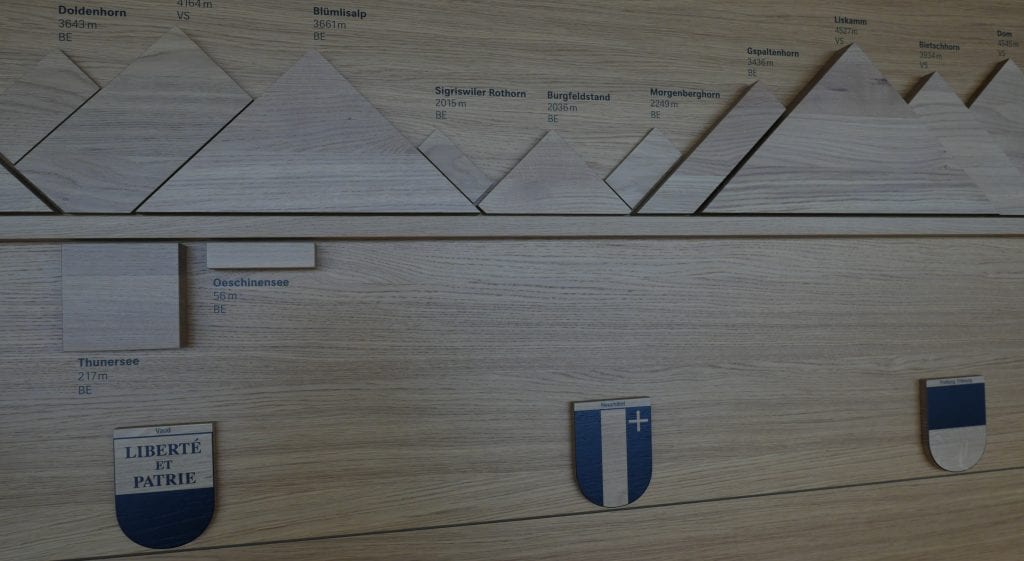 The wall is divided up into sections, each of which contains information on a different Canton of Switzerland, depicting each region’s mountains and lakes above its official crest. A selection of tourist literature is also available to take away. 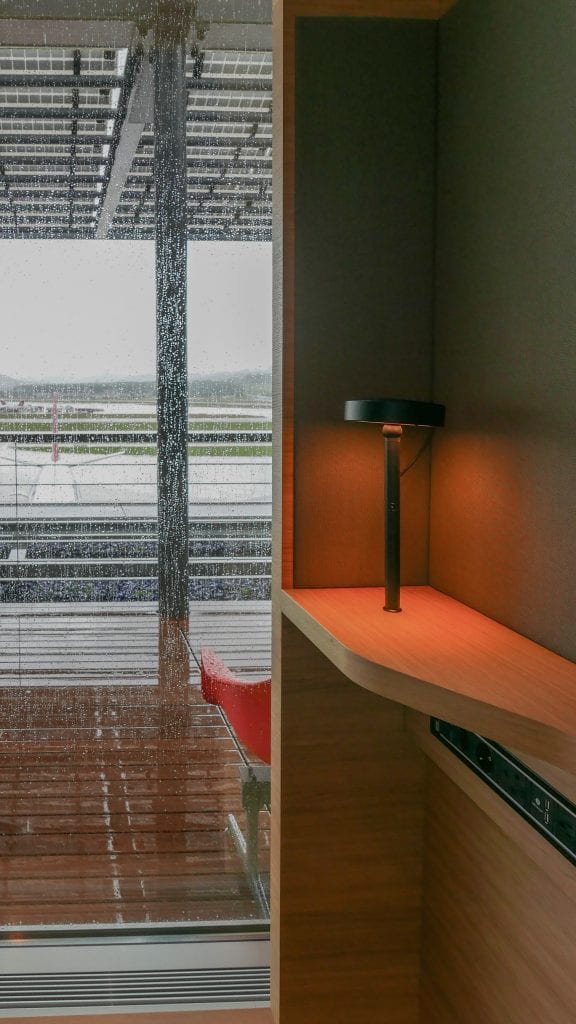 A number of semi-private phone booths are located at the far end of the Boulevard, these have no seats but do offer a variety of charging sockets as well as a small desk area on which to write notes or type on a tablet or laptop. There were no seats here though, for work not involving a phone call it would be better to head to the dedicated Work Area instead. 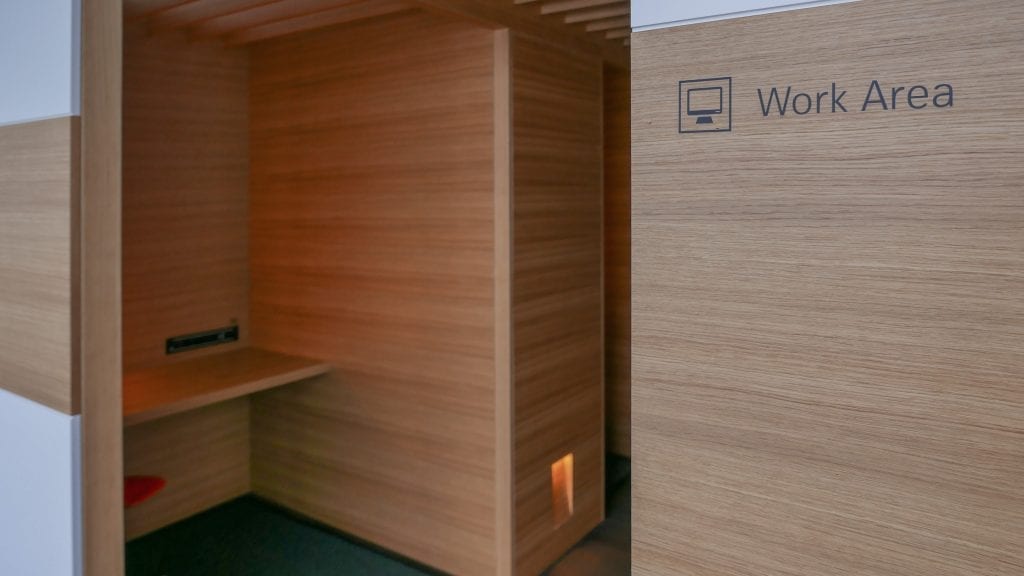 The work area’s located just past the main dining hall. 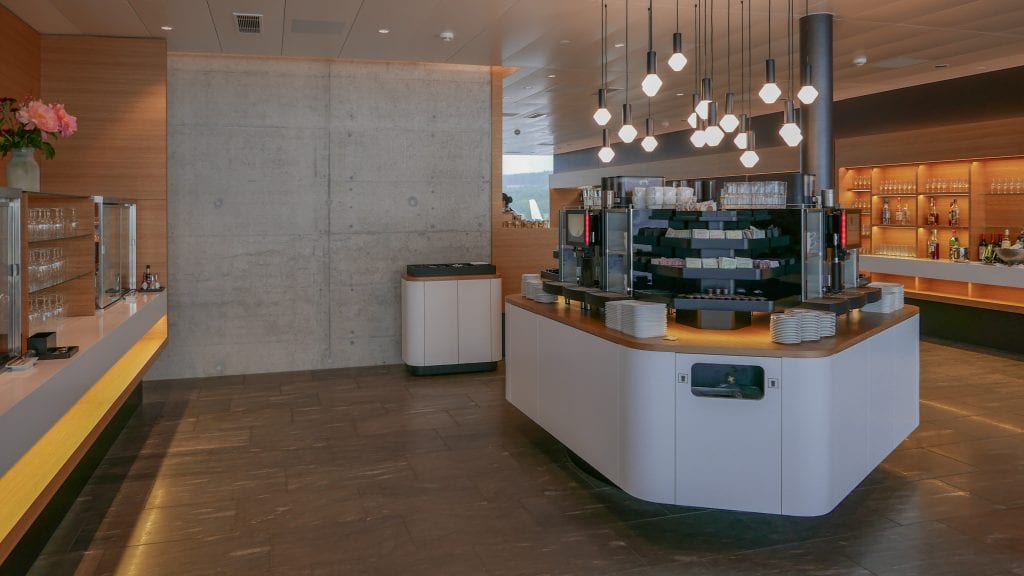 My first port of call was the Coffee Station, where a huge variety of teas was available in addition to freshly made bean to cup espressos. There was also a mini buffet of cold food items contained in the cabinets on the left. 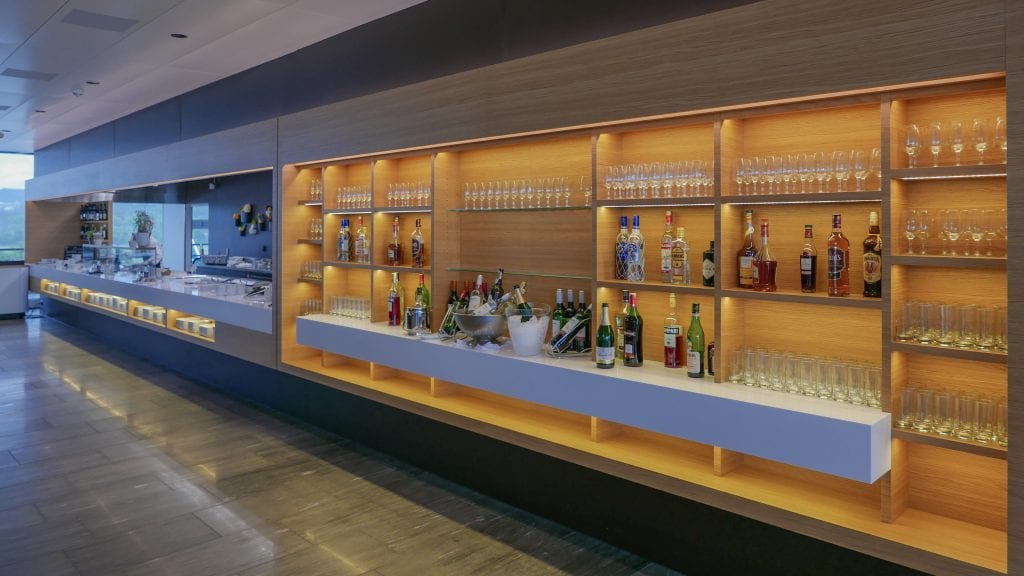 A selection of bottom shelf wines and spirits was available just beyond the Coffee station, on the way to the live cooking station (aka Front Cooking on the lounge map) 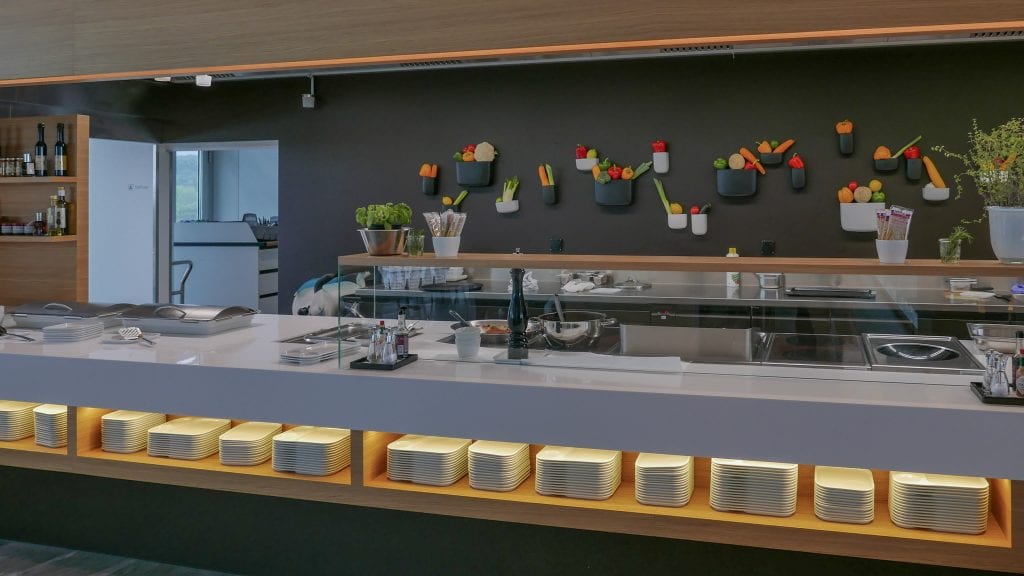 I arrived just between the breakfast and lunch services. The self-service containers were all empty as was the live cooking station. 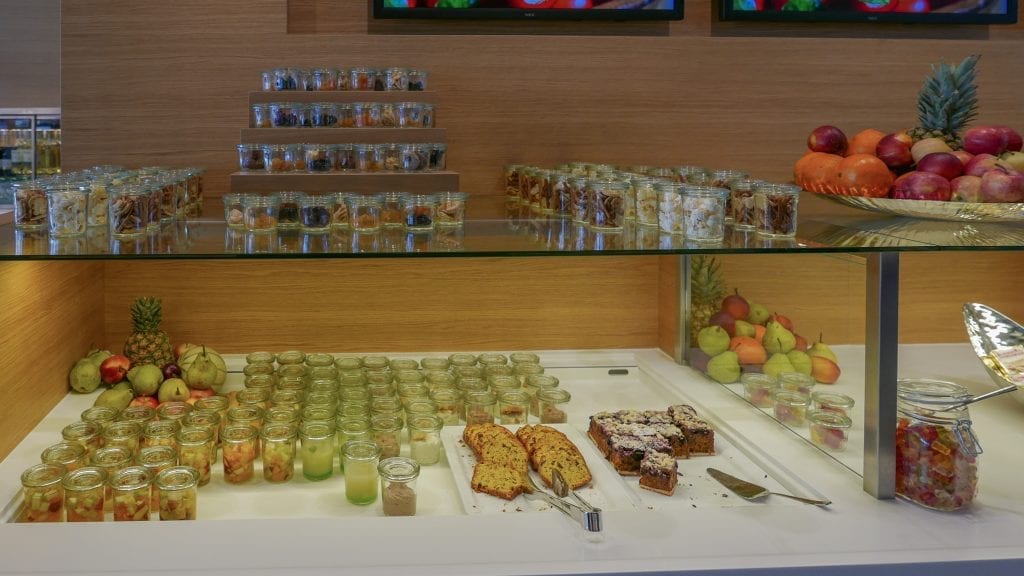 The buffet sections were full of stuff like this, i.e. carbs in various shapes and sizes. Great if you want gummy bears, cake and chocolate pretzels for breakfast. Not so good if you want anything hot or substantial… so just like the service on board my SWISS flight basically. 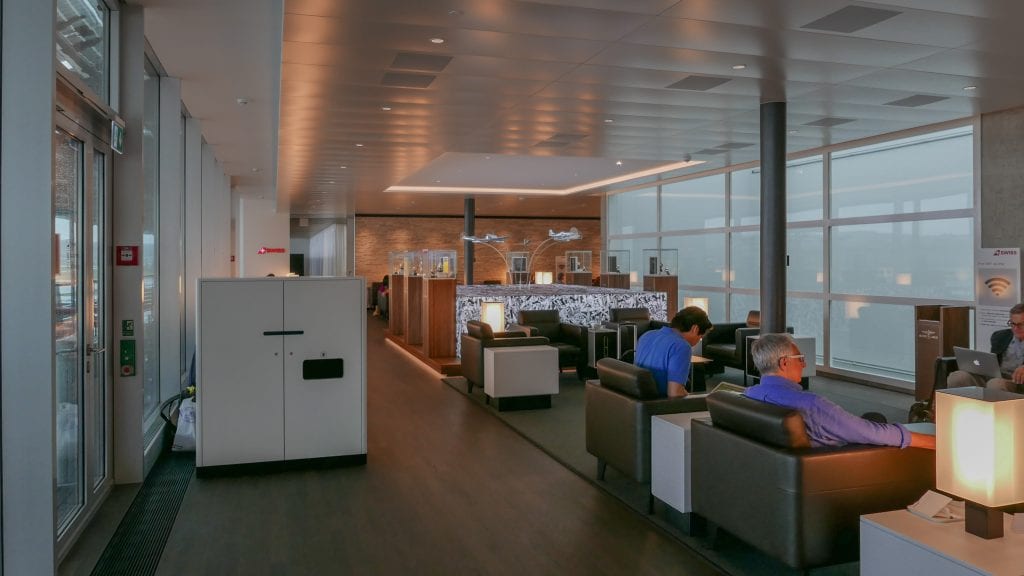 The rest of the lounge is filled with seating areas of varying shapes and sizes. All tastefully decorated and with the majority of seats having access to power and tabletops. The door on the left was one of three access points to the outdoor terrace… 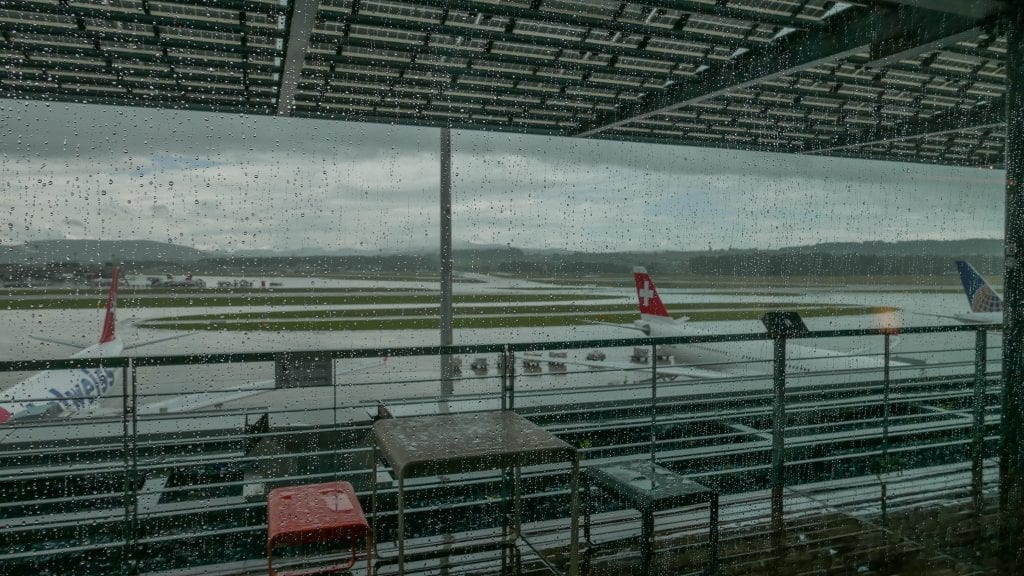 …although given the weather, I wasn’t able to go out and enjoy some summer plane spotting against a delightful mountain background, as I had envisaged. 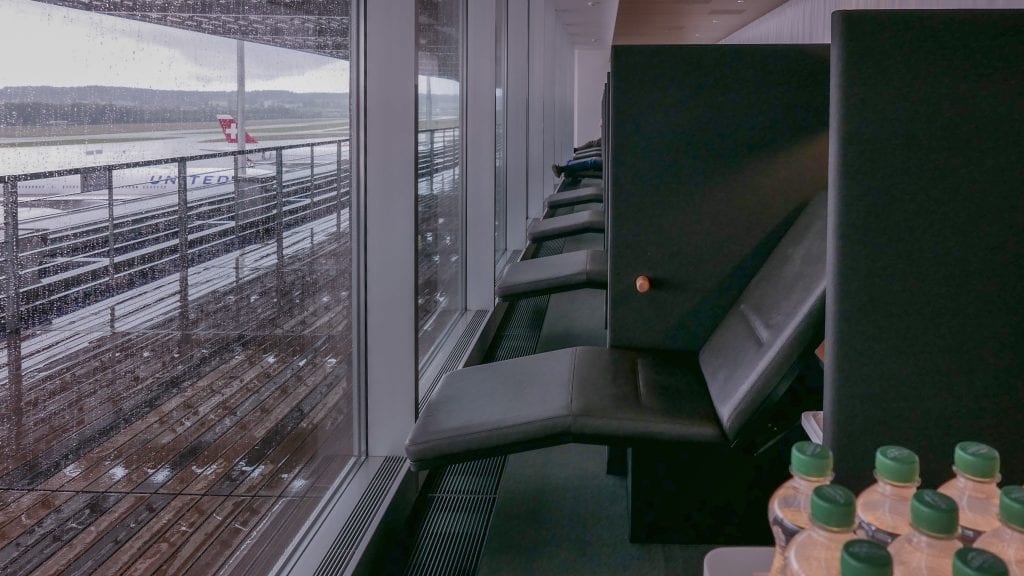 I continued my walk along the inside of the lounge and came to the relax area, right at the end. The reclining chairs here are comfortable and the pods offer a decent amount of privacy, storage and have power sockets too. 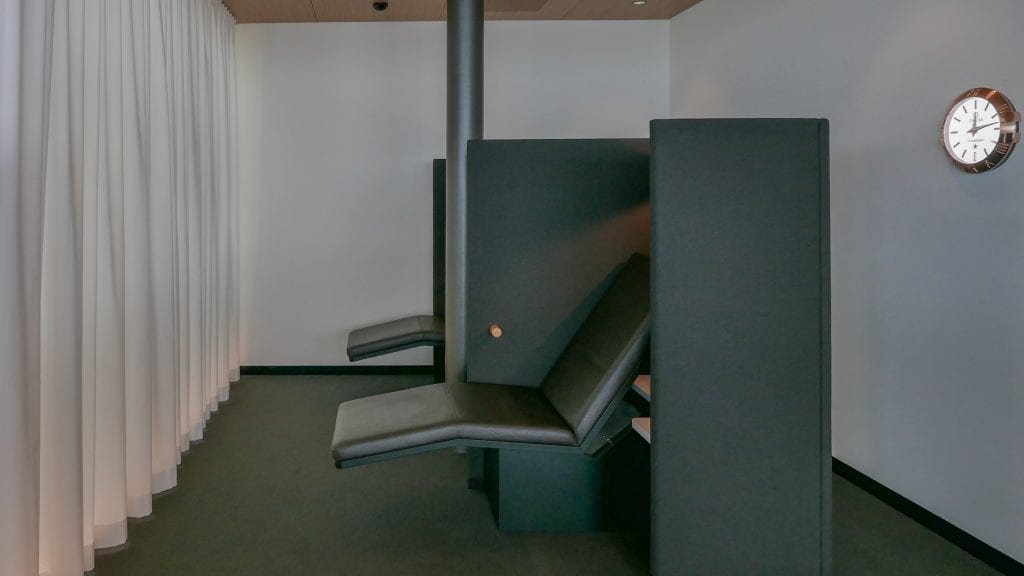 The majority of the relaxation pods face the terrace, wih these two being the exception. I don’t know why anybody would want to sit in the first of these. It offers no privacy and gets loads of light despite facing away from the terrace views. 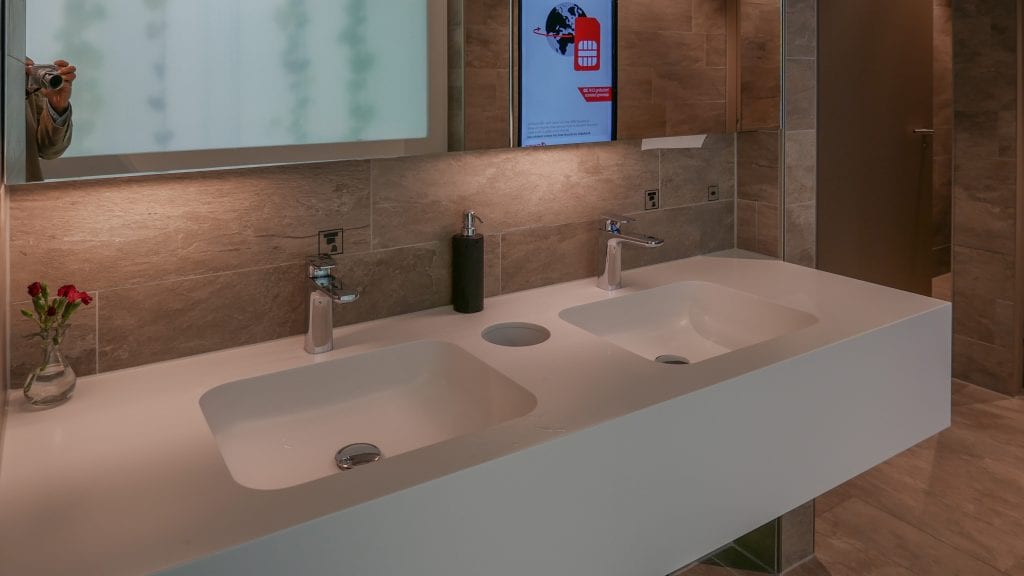 With almost the entire lounge explored and photographed I quickly headed to the bathroom. The decor there was incredibly elegant and modern. BA would do well to take note. This is a lounge specifically built for Frequent flyers; there is natural stone, recessed lighting and freshly cut roses – everything is also kept spotlessly clean. 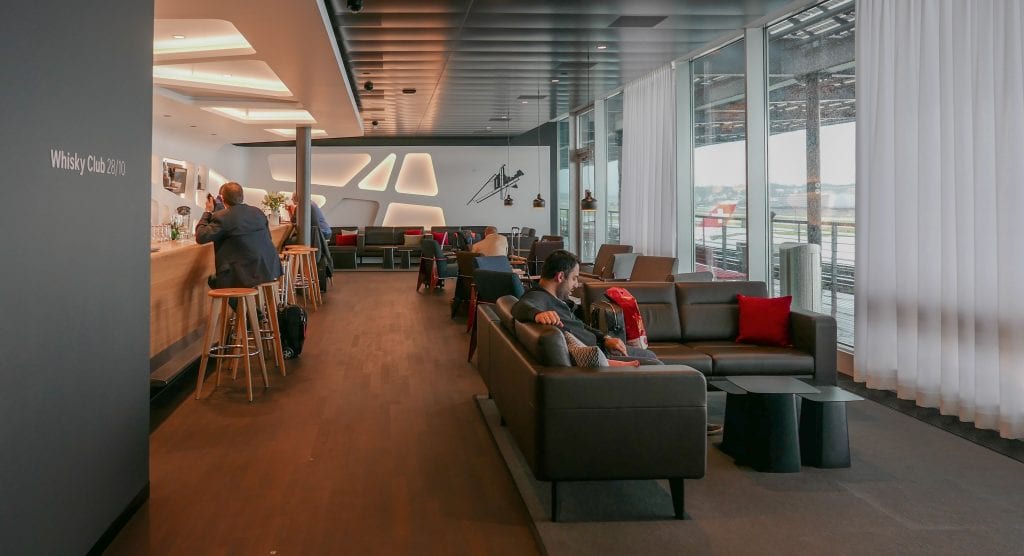 After my quick investigation of the regular parts of the lounge, it was time to check out the Whisky Club 28/10 – an unbelievably cool concept and something above and beyond what is offered at most of the world’s First Class lounges, let alone frequent flyer facilities. 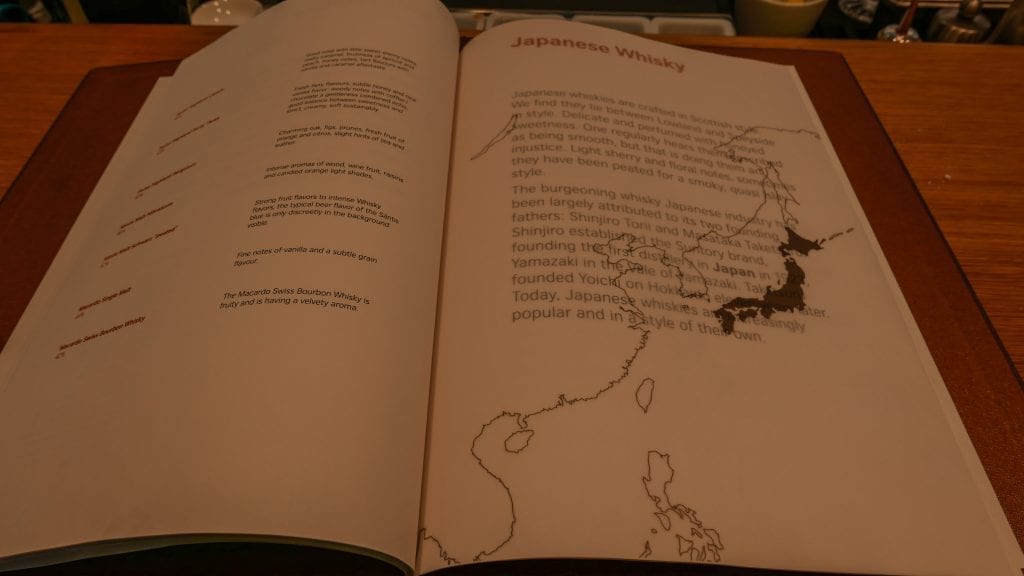 I pulled up a seat at the bar and was quickly poured a glass of water and handed a weighty tome containing a mesmerising level of detail on the whiskies of the world. The menu was beautifully constructed and better designed than comparable examples at top bars in the cultural capitals of the world. 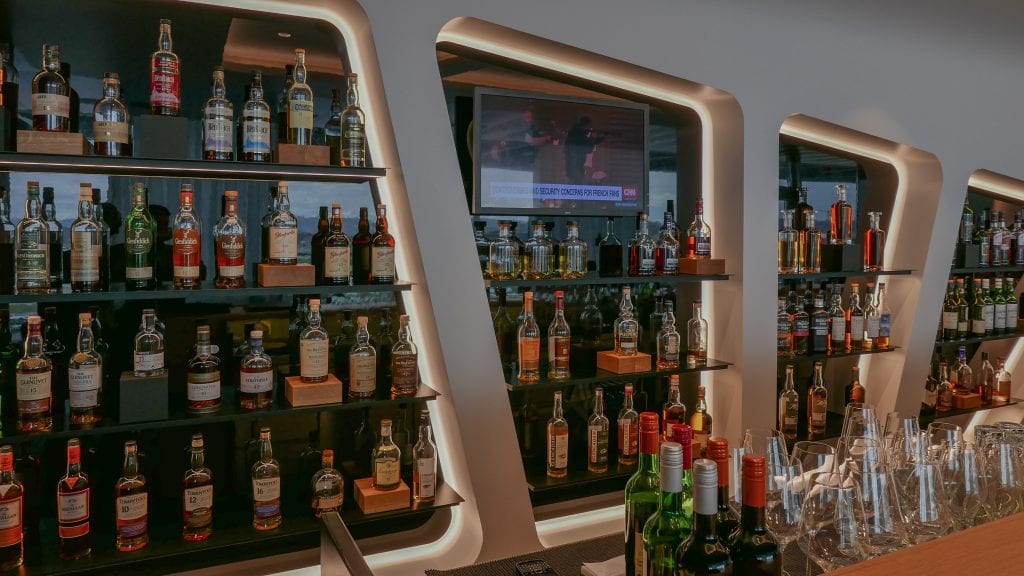 Unfortunately my first choice, A Yamazaki 12, was unavailable. However I still had a dizzying array of bottles to choose from and was offered a dram of The Nikka 12 whilst I deliberated further 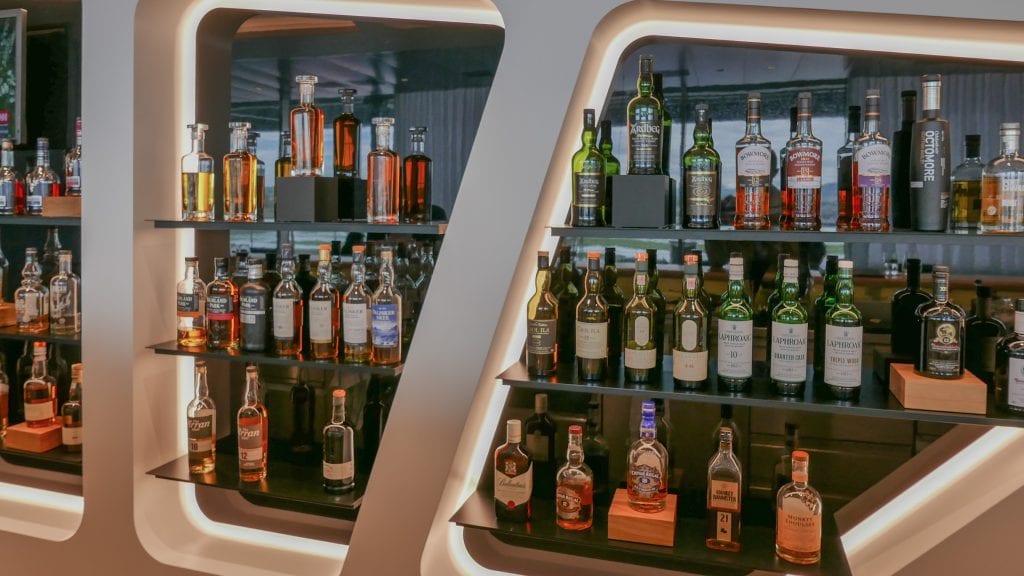 Being a fan of the peaty power of an Islay malt, I was particularly pleased when I spotted the section at the far end of the bar. 3 different Ardbegs? 3 Laphroaigs? Unbelievable!

I don’t know how SWISS has the resources to build such a spectacular lounge, particularly since Star Alliance Golds flying in economy are granted access, but I’m glad that they do.

The design is superb. The views are incredible, as is the concept of having an outdoor terrace running the length of an entire terminal building. Whilst I was unable to experience the food as a result of my slightly unfortunate timing, the whisky bar more than made up for it.

The whisky bar alone is reason enough to visit this lounge. If you have Star Alliance Gold and a few hours to kill, an economy round trip ticket to Zurich would make for an amazing (and great value!) day out. Plane spotting, fresh air and a dizzying array of top shelf whiskies from the best distilleries in the world. What’s not to like?

The Senator Lounge at Zurich’s E gates redefines what an airport lounge can be. If this was a First Class facility it would be amongst the best in the world. The fact that it is open to frequent flyers across the Star Alliance network, flying short-haul economy, is absolutely stultifying. 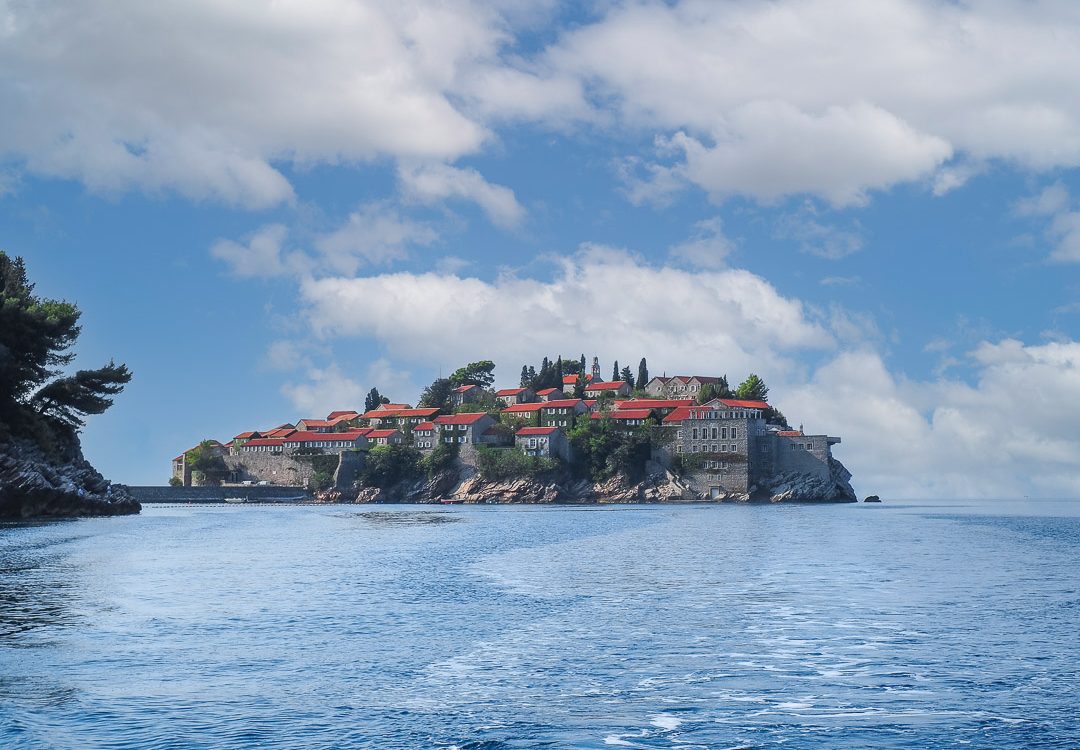 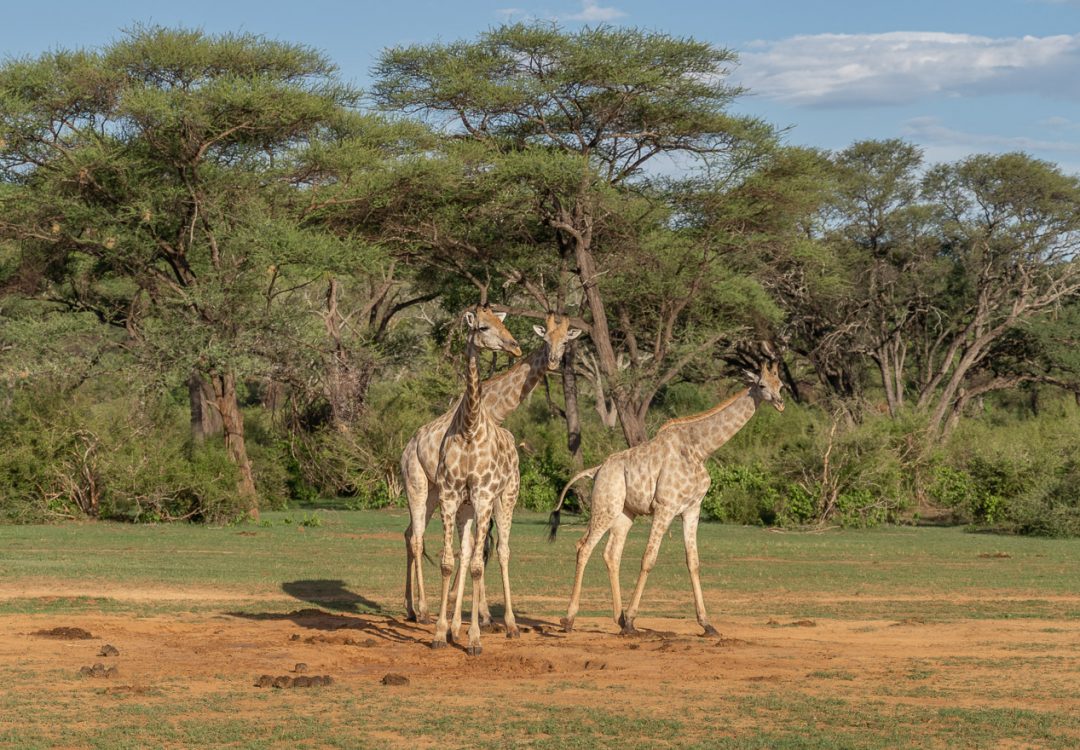 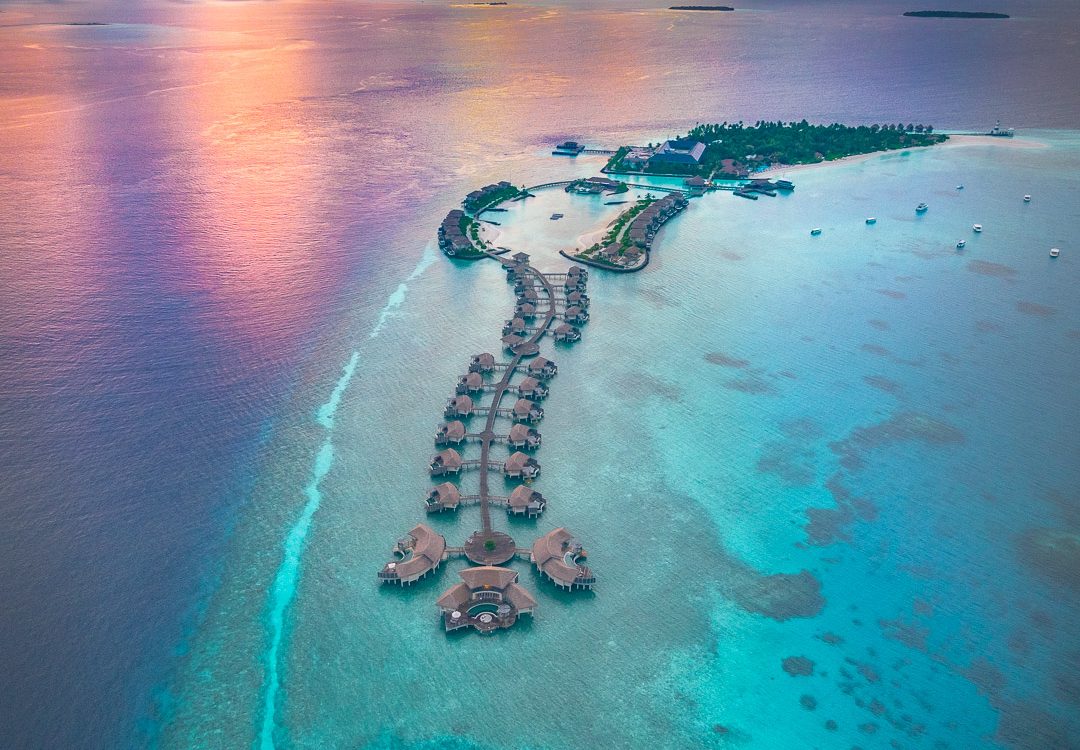